FIAR: The Clown Of God

Tomie dePaola is one of our very favorite authors. We enjoy reading his books, no matter the topic. We try to purchase them when we can because they are such rich stories. This one is no different and our experiences for FIAR have been fun!

The Clown of God is a retelling of a French legend. It is, however, set in Italy with Renaissance influences seen throughout.

We followed much of the discussion points in the FIAR book. There is a lot of rich information there. We did add a discussion about Italy and the Renaissance and its music.

Map work was almost the first thing we did. We marked the map with the FIAR circle for Italy but we also located France. We discussed what we knew about each of those countries, building our knowledge as we go along. We pulled up some pictures on the computer on each of the countries and talked about the differences we could see.

Juggling was very prominent in this story. We pulled out some juggling balls and taught the girls the basics of juggling. They practices quite a bit but never got the hang of it. It is much harder than they thought. We also looked up some juggling videos on YouTube. Here are some of what we watched:

Our favorite media is chalk pastels. We used this again to make some art pieces showing the juggling hands. There isn’t much to what we did. We drew a pair of hands based on a page on the book. Then we drew each of the balls that were juggled, taking care to draw them in the same order they were repeated in the book. 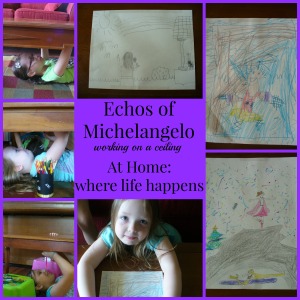 We studied a bit about Michelangelo. When he came up in our Bible study a few weeks ago, we did a drawing as he would have had to work on the fresco on the ceiling of the Sistine Chapel. We taped papers to the bottom of the piano bench and coffee table. The girls lay on their backs and drew a picture of their choice. It was an interesting perspective for them.

So for this study we invited some friends over. Then, we reviewed a bit about Michelangelo and what a fresco is. We looked again at pictures of the Sistine Chapel. We went outside because it was about to get messy! We mixed up some plaster of Paris (best we could do for a fresco) and poured them into saucer sized paper plates. The girls then painted on them with brushes we were willing to throw away and acrylic paints. It was lots of fun and taught them a bit about the difficulty of the types of artwork that Michelangelo created.

We found a lot of repetition in the book, particularly in the colors of the balls. We used that as a springboard to patterning and creating patterns. J did a lot of different patterns with counting crystals and counting chips. She also worked on classifying the counting chips according to color, counting them, and writing the number on a white board.

The Clown of God video

I found a video of the story of The Clown of God on PBS.org. We watched it and compared it to the book. There is a bit of the book left out and it changed the impact of the story, in my opinion. It was a good study of variations, though.

We have talked about the music of the Renaissance before. However, we pull out music whenever we can so this a perfect opportunity. We pulled out some CDs that we have from Music Literature classes in college. There are some very nice pieces by DuFay, Despres, Praetorius, and Byrd on them. I also used Last.fm and created a channel for the 1500s. We listened to it while working on artwork and transition/clean up times.

Because the dress and dance of the Renaissance period is so important to the culture of that time, we studied it a little bit. We studied the drawings that Tomie dePaola created and discussed the way the characters dressed. We talked about when you could see the class change by the way someone dressed in the illustrations. Then we visited YouTube. (YouTube is definitely becoming my friend!) We watched a video of traditional dance and music with examples of traditional instruments and food as well. We all loved it and watched it more than once.

We were able to use the story in The Clown of God to discuss the religion that is primarily found in Italy and how it differs from our beliefs. It was a natural and helpful way to bring in the fallacies of some religious groups that exist. We brought out the Bible and looked up passages that related to the specific questions the girls asked and things they noted based on observing the book’s story and illustrations. I didn’t write those down but they might not be of help to you anyhow because they were specific to questions the girls had.

We didn’t do a whole lot with food but while I was at the store one day during this study, I found a couple of boxes of Italian Ice on sale. I thought it would be a fun little addition to our study. 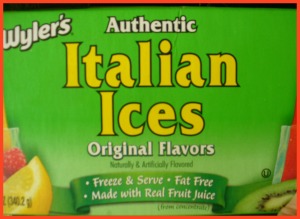 We had a lot of fun with The Clown of God. This is a book we don’t own but I would really like to. It is a fantastic story. If you have studied The Clown of God, as part of Five In A Row or not, I would love to know what you did. This book was so much fun that we will probably study it again another time outside of the FIAR series. At Home.