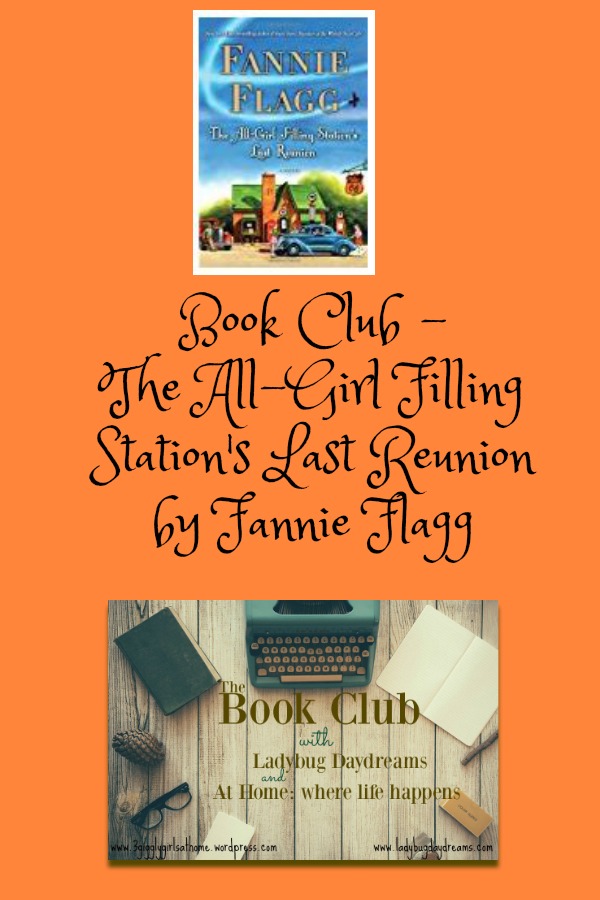 At the end of the last Book Club post, I mentioned the book we expected to be discussing this month. It was a very obscure one and I don’t think we realized just how obscure until we tried to get our hands on it. So, we made the decision to change and I neglected to let you all know. I apologize for that!!

Before you move on to my summary and questions, I wanted to update this with Wendy’s link. She had some very good thoughts so please head over to Ladybug Daydreams and read her post about the book.

SUMMARY: Sookie has finally married off the last of her girls and feels like, other than her aging, somewhat-exuberant, always in the middle of something mother, she is finally free to relax. Sookie’s husband is a local dentist so she is very conscious of who she is at all times and who she represents when out and about. In addition to that, her mother has always insisted that Sookie be dressed well and, well, just insisted. About everything.

One day, though, Sookie finds out that there is a secret in her past. As she begins looking into that hint of something different, she finds a big twist that she never expected or saw coming. So much for relaxing with an empty nest! She finds herself looking far back – 1909 to be exact – and off in Poland. That is where Sookie’s story began.

Stanislaw Ludic Judabralinski left the dangerous life of Poland and headed to Chicago at the age of 14. There he lived, worked, fell in love, and married. With his wife Linka their family began. They worked hard and owned a filling station (here is where the title begins to make some sense). After having a gaggle of girls, war came, death came, and the girls had to step up to help the family. In order to attract customers to their filling station during the war (we are in WWII now), the girls advertised the all-girl filling station. They worked hard for their family and kept them together during the rough times.

But, even rougher times were ahead and one of the girls, Fritzi, decided she needed to do something more. She joined the WASP and moved to Texas to train. The WASP training was interesting and challenging and do we ever get to see a big bit of Fritzi’s character! It is fun.

All of this jumps back and forth from present day, with Sookie searching out all of this information, to the past to help us learn Sookie’s history. As we near the end of the book, the history is all making sense and well, there are still plenty of surprises for you to find out.

This is a terribly fun, interesting, and engaging story. I had such joy reading it. (I had also read another Fannie Flagg book earlier so I kind of knew what to expect with her jumps from time to time and character to character.) A definitely recommendation.

1. A lot of Southern identity is wrapped up in one’s family history. “Now, just who are your people?” is an oft-quoted phrase around the region. Sookie’s biggest crisis comes when she realizes that her “people” aren’t actually who she thought they were. How does Sookie’s discovery of her true family affect her identity?

Sookie’s discovery was a shock. She felt she was an imposter, a big fake. Even a liar. She wasn’t but that is how much it impacted her. You can be an imposter or a fake or a liar when you didn’t know that what you were purporting was incorrect.

2. Though Sookie tells us that Lenore’s nickname, “Winged Victory,” came from the way she entered a room—as if she were the statuesque piece on the hood of a car rushing in—how might “Winged Victory” reflect Lenore’s personality in other ways? Does her representation as a classical goddess serve to heighten the air of history and tradition that surrounds her? How might the image of a winged woman tie Lenore in with the ladies of the WASPs?

I don’t know if the image of the winged woman was intentional to tie in the WASP but it certainly does. Especially when you know that the mascot of the WASP was actually a winged girl. And the WASP were women who flew, helping provide victory during the war in every way they were allowed.

3. Sookie’s best friend, Marvaleen, is constantly trying different suggestions from her life coach, Edna Yorba Zorbra. From journaling to yoga to the Goddess Within group, which meets in a yurt, Marvaleen tries every method possible to get over her divorce. How does Sookie’s approach to dealing with her problems differ from Marvaleen’s? Do you think her friendship with Marvaleen might have helped push her to confront the question of her mother?

Marvaleen was quite a character. She never really faces her problems; she just searches for another magical fix. This is where her crazy life coach comes in. I think Marvaleen was a good balance for Sookie, helping her recognize over-the-top when it showed up.

4. In The All-Girl Filling Station’s Last Reunion, we learn about a mostly unknown part of American history—the WASPs of World War II. These women went for thirty-five years without recognition because their records of service were sealed and classified. Were you surprised to learn about this? What parts of the WASPs’ story spoke to you?

Actually, not at all surprised. We have studied this recently and we were able to visit the WASP Museum in Sweetwater, TX, not too long ago. The WASP stories are amazing and the women are quite inspiring. They definitely faced things head-on!
Want to read about our visit to the museum? We’d love to share it with you!

5. “Blue Jay Away,” Sookie’s brand-new invention, keeps Sookie’s house finches and chickadees fed, while also making Sookie famous. Who do you think have been the blue jays in Sookie’s own life? Has she learned to manage them successfully?

I don’t know that we ever are able to “manage” the blue jays in our lives. We manage ourselves around them and become more confident in who we are. I think that is what happened with her mother, in particular. Sookie became more confident once she understood more about her background and was able to be more herself, rather than fitting into what someone else expected of her. That is a very freeing thing.

6. A major theme in this book is accepting your home. Sookie experiences a homecoming many times—after she first meets Fritzi and returns to Point Clear, when she goes to Lenore’s bedside at Westminster Village, and when she flies to Pulaski for the All-Girl Filling Station’s last reunion. What is your favorite part about going home? Who are the people who make home a home for you?

Home is where comfort abides. Family makes a place home. So do friends.

I truly enjoyed this read and will be reading more of Fannie Flagg’s writing. It was a joy. Watch for Wendy’s post to come up. I’ll try to remember to share it with you when it becomes available. Also, once we have decided what we will read for the coming month, I will share that, too. Thanks for joining me again for Book Club.