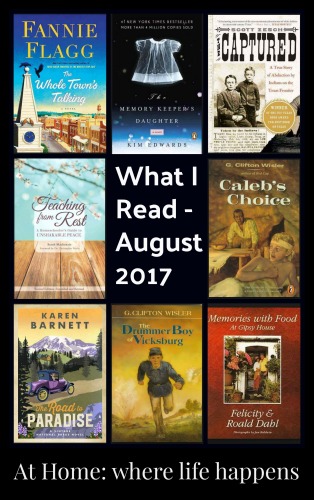 I enjoyed quite a variety of literature in August. I am working pretty hard to find a few minutes each day to read just for me. It brings me calm and peace and I truly enjoy stretching my mind a bit.

The reading I am listing here is in addition to a good, personal, Bible study each morning. Some days I do better than others. Right now, I am reading through I & II Corinthians a few times. We are studying and teaching this for Bible Bowl this year so I am trying to become very familiar with it.

This is an easy to read chapter book that would easily be considered a living book. Wisler wrote several books that are historical fiction but so well done that the reader finds himself a part of the story. During the 1860s in Texas, Caleb is sent to live with his aunt after hard times hit his family. He finds a loving home with hope and joy. He also finds himself in the middle of a dilemma: does he help slaves trying to escape to freedom or walk away and pretend he knows nothing about it? Either way, at least two lives are on the line.

Another living book by Wisler, this one takes place during the Civil War, as well. Orion Howe is a drummer boy and he has a responsibility. By fulfilling his duty, he helps many and inspires those around him. During the battle at Vicksburg, Orion sticks it out in the midst of significant hardship, injury, and loss.

Captured: A True Story of Abduction by Indians on the Texas Frontier – Scott Zesch

This book is an in-depth look at the period of time in Texas when many of the settlers had children kidnapped by Indians. This was an ongoing problem that the government had no control over. Zesch took on this topic because he wanted to know more about his own ancestor who had been captured by Indians in Texas. There are many stories followed through this book and a look at the lives those captured lived.

Many ideas are discussed, including the Indianization of those who lived to take up residence with the Indians. Their lives were quite different in the Indian camps and many were never able to reassimilate into white culture.

This was a really fascinating look at the people affected by the raids, including many whose loved ones were killed or badly maimed. It is not an easy to book to read and there are some very graphic passages, as the Indians and whites were not kind to one another. It is, however, a perspective on the history of Texas that is not discussed in depth very often. I definitely enjoyed this read.

Twins, born in the middle of a blizzard. Twins, one perfectly healthy and the other with the recognizable signs of Down’s syndrome. A quick, final decision to send his daughter away changes Dr. David Henry’s life, his marriage, his own strength of character. He believes he is doing right but the nurse asked to take her to the institution refuses to leave the precious child. Instead, she disappears and raises the child as her own.

This story is one of independence and dependence, mixed and interfering with each other. Life is lived, not in a bubble separated from other things, but in moments of interaction. This is a lovely story of love stronger than duty and right motives changing lives. It was an interesting read that I was glad Annette had suggested.

An interesting take on a novel setting, this story is set in Mt. Rainier National Park in the late 1920s. Margie Lane is not your normal girl and she comes to Mt. Rainier in not-your-normal way. She is escaping something, or someone, but she tries hard to fit in at Mt. Rainier as a ranger. Except the men around don’t want a woman getting in their way. Can Margie find a way to be a part of the park without getting in the way, without getting involved, and while still managing to be inconspicuous to the outside world?

This was a fun take on a novel. The setting was appealing to me, as I find all National Parks interesting right now. So, setting a novel in one was kind of fun. The novel was easy to read and enjoyable, clean and still exciting. A few bits were forced or contrived but it was still a good, quick story to read. I’ll link up my full review here in the next few days.

I wrote about this book not long ago. I loved where it started – what is rest? We think of this is one way but really, it is a wrong way to think. Thinking of rest as unstressed, peaceful is a start but what she is driving at in this book is not that. It is being fully enveloped in God’s rest and facing each day, each moment, from there, facing what God has placed before you to do. This is teaching from rest.

Another fun read! This one take you back to the very beginning, to the founding of the town. As the active members of the town pass on, they are buried in the town cemetary. But their participation in the history of the town doesn’t stop there. The discussions that happen in that cemetary? Well, it is fun and interesting. Lots of characters show up that tie many of Fannie Flagg’s books together and make for a fun and interesting read.

This is a combination memoire and cookbook. Written by Roald Dahl and his wife Felicity, this is a unique look at an author that many are familiar with. The book moves forward with anecdotes, almost all of which center around family, friends, and home. Of course, food is a big part of it as well. With lovely photographs and thoughts, the recipes are interesting and inviting. The thoughts are shared by Roald Dahl, his wife, and their children, grandchildren, and family friends. Pull up a chair and a cup of tea and dive into this delightful book.

What did you read in August? Please share something in the comments for me to add to my reading list.