Experiencing history is a memorable way to understand it and Heirloom Audio Productions treats their listeners to an experience of history each time you turn on one of their audio theater productions. Wulf the Saxon follows the tradition of great productions that Heirloom Audio has created. This 2 CD set brings your family almost 2 1/2 hours of entertainment focused on history, values, and adventure.

Heirloom Audio Productions has created a series on The Extraordinary Adventures of G.A. Henty, based on the novels written by G.A. Henty. Henty was an adventurer who traveled around the globe to find out as much as he could about the truth of the past and then he wrote novels based on those happenings. Heirloom Audio has taken those wonderful novels and with the help of fantastic script writers, great researchers, and amazing voice talents, they have created a series of audio theater productions.

These are much more than audiobooks; these are audio adventures. The voice talents that participate create an atmosphere that brings the listener right into the story, complete with sound effects and a soundtrack of music that adds to the story. The listener is transported into the story.

In this case, we are transported into the events and battles leading up to the battle in which the Normans beat the King of England, and then William the Conqueror is named king. At the beginning of the story, Wulf the Saxon is a young man and Edward the Confessor is on the throne of England. Wulf is a thane. He is well liked by the people who work his land and he is considered a fair-handed ruler who keeps his promises.

Wulf is a thane under Earl Harold and spends much time with him. Harold and his men went sailing and were blown off course when a storm came. They ended up in Normandy and were imprisoned. Wulf and another young man escape and are able to make it to the home of a nobleman who is friendly to Earl Harold. He secured the release of the Earl and treats them all well until they are able to return to England. During their time there, there is a battle in which Wulf shows how good his instincts are. Wulf is a significant contributor in the battle win. Harold and his men return to England.

Before too much time passes, the Welsh invade England. Wulf the Saxon once again shows his knowledge and instincts by securing the castle of Prince Lewellyn without any bloodshed.

After about a year passes, the northern areas are in a rebellion against the crown. The king becomes very sick and must pass the power of the crown to Harold. When the king dies shortly thereafter, Harold is named king. Wulf is right there in support of this man who had always treated him and others fairly. As king, Harold almost immediately has to fight off the Norsemen invading the north and finds out that the rulers betray the crown. A slaughter occurs and while this is going on, William of Normandy sails to invade.

King Harold assembled his men to fight when he realized that the Normans were going to take advantage of their weakness. They fought bravely but lost and the king lost his life. While protecting the body of the king, Wulf and others were saved from certain death by the Baron who rescued them years before by providing ransom in Normandy. He took them as captives and returned to his home. This was quite advantageous for Wulf as he had fallen in love with the Baron’s daughter. The end of the story is lovely in that Wulf and Agnes are able to marry for love.

This is a story that rises and falls with the crown and its power. It takes you on a ride, for sure. There are a lot of people in this story and it isn’t easy to understand who they all are. It is still a captivating story and you can’t help but learn more about the history of England. There were themes thrown into this story that are great life lessons. Some of these:

As always, the minute the CDs arrived, they disappeared into the bedroom of Miss E and were not seen again until I asked for them, knowing I needed to listen to the story for this review. She adores all of the Heirloom Audio Productions and knows so much history because of them. She was able to help me place where this one falls in the timeline of the Heirloom Audio stories.

As a parent, I like knowing that there will be no questionable material on the discs when they come from Heirloom. I can trust that the girls will be exposed to solid history and when appropriate, the Christian values of the characters are brought out. This particular production does not have as many obvious Christian elements as others they have done in the past but it is still full of quality values. As a parent, you will want to note that there are several battle scenes in this, and while they are not gory and blatant, Heirloom does a solid job of sound effects that add to the reality of the scene and experience.

Miss E’s take on this story –
My favorite parts were the beginning and ending scenes where the two young brothers were talking with Mr. George before and after the story. During the story, it was kind of confusing to try to keep track of who was who and what they did. I did like this story but it is not my favorite of the Heirloom stories.

Heirloom Audio Productions has an online community: Live the Adventure Club. As a member of the Live the Adventure Club you will have access to digital files of the stories, listen and learn script read alongs, quizzes that go along with the adventures, and materials to further the learning related to the adventures such as Thinking Further and Defining Words.  There is also access to old-time radio programs, encouragement and devotional thoughts, and other parenting materials. The community forum is also a place where members can chat about the adventures, education, and other topics of interest to them. 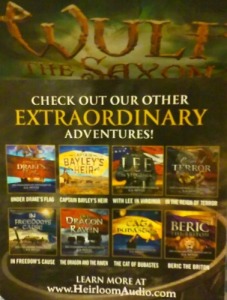 Heirloom Audio Productions does not disappoint with their latest audio adventure, Wulf the Saxon.

Read what other Homeschool Review Crew families thought by clicking the banner below.