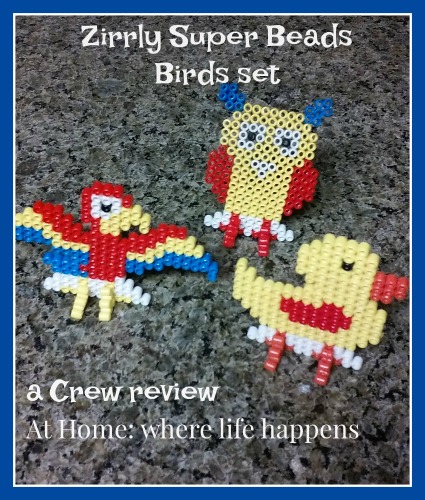 Creating and crafting are something that happens often, if not daily, in our home. We all enjoy different forms of crafting and so when Zirrly came up to review their Super Beads, we were more than happy to try out the Super Beads Bird Set. Since it arrived just as Miss J was finishing up her unit study about birds, this made a nice final project.

Zirrly is a company that creates various crafting items and kits. Whether you are looking for bead crafts like these, wood crafts, ceramics, fabric projects, or dough/clay, there are lots of options. They also have a selection of materials to purchase. This is a great crafting site to go to when you need something. 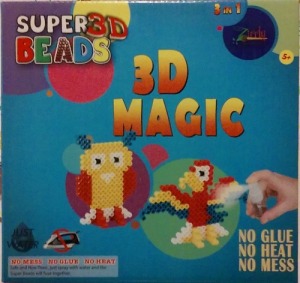 We received the Super Beads Bird Set. This kit arrived in a box, with all the materials tucked inside in a plastic divided holder. Each color of beads was individually packaged and it included two pegboards for making the creations. We also received three patterns, a spray bottle for the water, a tool for removing errant beads or pulling the creations off the pegboard, and instructions. We were warned ahead of time that the included instructions were not quite right and how to adapt them to work better.

Miss J jumped right in, wanting to create her birds right away. We talked about what to do, but it wasn’t really needed since she has used a different brand of water-fusing beads before. She placed the pattern beneath the plastic tray and started adding her beads. After just a short while, she noticed that some of the beads had lines at one end and went into the tray best when those were all lined up at the top. Sure enough, that was in the instructions that I just thought I had read. 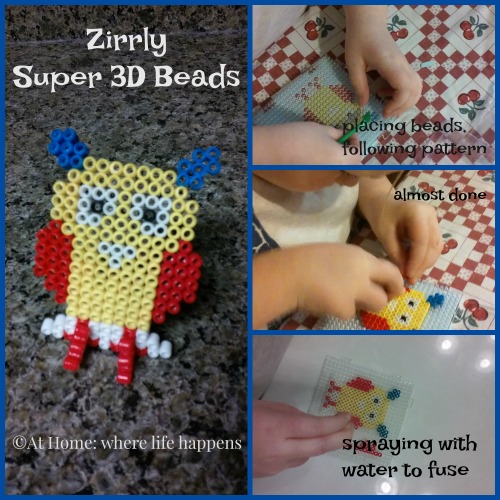 She got her beads into the pattern and then we took it to the sink to spray. She sprayed it lightly as the instructions implied, tilted it to drain any extra off (there was none), and set it to dry over a paper towel since there were drain holes in the boards. After a couple of hours (the instructions said 1 hour), we checked to see if it was dry. It was but when we pried it off the board, it came apart. So, we put them back in the right place and resprayed it. This time we REALLY sprayed it so that there was water that drained off. And we left it to dry overnight (partly for the time and partly because it was time for bed). When we took it off the board in the morning, the side that had been against the board was sticky and wet. So, we just took it off the pegboard, turned everything over and let it dry again. We did not re-secure it to the pegboard but should have because it warped a bit as it dried.

Once we knew the process, Miss J was happy to create her other two birds from the kit. She did them both at once. She put them together following the pattern, sprayed them well, drained them, let them dry several hours, turned them over, let them dry some more. Finally, she took them off the pegboard for the final time and put them together. Their little stands were cute and worked well. 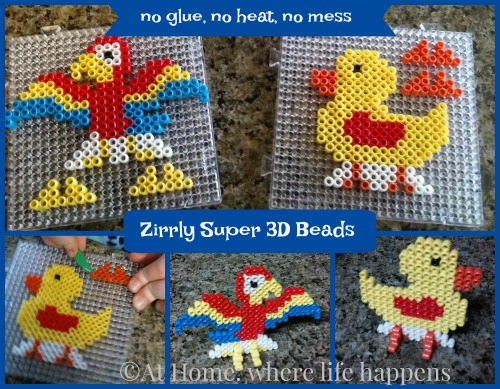 These were a fun activity and the kit came with several extra beads. Not enough to remake any of the bird patterns but enough that a child could create their own project or pattern with what was there. We did end up with a number of broken beads in our kit and if we had had any additional ones broken in one of the colors, we would have had to adapt the pattern because we did not end up with any extras after making all three birds.

The water-fusing beads do well and Zirrly’s are sturdy after they are dry. Other brands we have used are round and come apart much more easily than theses. The Zirrly creations are also a bit flexible when dry, part of what makes them less prone to breaking apart. This is certainly a company we would be happy to use a kit from again. It was fun.

Miss J’s take on them:

It was okay. I kind of like Zirrly beads but I kind of thought that for as long as it took to dry the first time, it was crazy for it to fall apart. I really liked the parrot; it was very colorful. I would recommend a bag full of mixed colors rather than the kit because the kit only makes a few things and we couldn’t be very creative. I would recommend these for about age 6 and up.

Be sure to visit the Homeschool Review Crew to read more reviews on the water-fusing beads from Zirrly. Some members received other kits: