imagine what things might have been like during that time. The Heart Changer is one such book. Written by Jarm Del Boccio, Author (who is also a SchoolhouseTeachers.com teacher), the story imagines what life would have been like for the people mentioned in II Kings 5. This is what most people know as the story of Naaman and the healing of his leprosy.

It is a good idea to start by reading the Bible story so that you are familiar with the history before beginning this fictional recounting. The author has done a good job of keeping the details of the setting and time as accurate as possible but it is still an imagining of people and places. Historical fiction such as this does a wonderful job of helping the reader understand much more about the time and people, while still keeping the history as accurate as possible. Since the story in II Kings 5 is not highly detailed, it allowed Jarm Del Boccio, Author, to image parts that don’t affect the Biblical integrity of the story.

The story begin with a young girl named Miriam, the name chosen for the servant girl in II Kings 5. Her village is being invaded and she is captured. She is given as a gift to the commander, Naaman, who was wanting a young girl to assist his wife. She is taken to Syria where

she is to serve. She struggles with some of the other servants who resent her presence. She remembers the loving training her mother gave her and treats everyone with kindness, even when they are doing less than that for her.

Eventually, she settles into the home. One day, she overhears that the commander is dealing with leprosy. She tells her mistress that there is a prophet in her home country that could help; the Lord could heal him. They eventually listen to her and travel back to her home town. After a time, Naaman is able to see Elisha and get the prophet’s instruction. He is upset that it is a menial act in a dirty river. He is convinced by his servants that he would do it if it were a much greater thing so why not do this simple thing. Naaman does and is healed. The story ends pretty quickly after that, with a little bit of wrapping up of Miriam’s story.

This is an interesting way to look at the history from the Bible, though it is important to recognize how much of it is imagined. The story is an enjoyable read and is appropriate for upper elementary through struggling high school readers. Addressing issues of loss, hurt, and forgiveness, this is a story that many readers will enjoy. 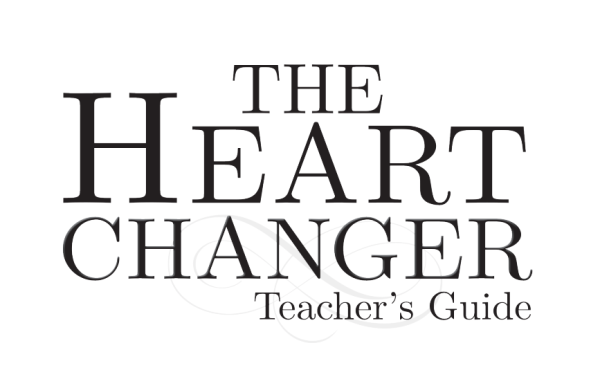 On The Heart Changer website, you can access a teacher’s guide by clicking on the white box that says “Teacher’s Guide.” The guide has a wonderful interview with the author, providing insight into the appeal of the story and how it came about. There is a section on getting to know Miriam with some information about who she was imagined to be and then asking the reader to consider some questions and ideas about Miriam.

There is a section on names and their importance, asking the student to consider different names from the story and from the Bible.

There is also a section on researching time and place. This is a helpful bit if a research paper is going to be written.

Also included are a few questions about the heart, a couple of Syrian recipes, and a page for notes. The guide is simple but effective in helping students dig deeper into the ideas and themes of the story, as well as applying those to their own lives.

I really liked the idea of this story, the setting of Naaman’s leprosy and finding out who

the servant girl might be. It is a great idea and I was really looking forward to reading this. However, I was a bit disappointed. It was missing a rich character development and there were too many secondary characters that had no significant purpose in the story.

I also wanted to get to the actual Bible story and see how it was portrayed. The Bible story part felt really short. I know that in the Bible it was only a few verses, so there was not tons of material to go off of. Still, I expected that to be featured more prominently.

This was a good fiction book, without enough basis to call it historical fiction. It was a little young for me, but for a younger reader, or a delayed reader it would be excellent. I think that it would also be a good fictional resource for introducing the Bible story of Naaman’s leprosy.

I don’t think that I had ever read a book set directly in a Bible story. I’ve read a few set right before or right after, and they were really good. With only this book to base off of, I don’t know which I prefer, but I don’t think that I will be completely closed to reading another book like this one.

Be sure to click the image below to visit the Homeschool Review Crew and read more reviews of The Heart Changer from other families.

4 thoughts on “The Heart Changer (book) ~ a Crew review”