This month’s selection is by Michael J Tougias and Casey Sherman. It is titled The Finest Hours: The True Story of the U.S. Coast Guard’s Most Daring Sea Rescue.

I had read a review of this book on A Net In Time and immediately went to the library site and put it on hold. It sounded fascinating and I was not disappointed. 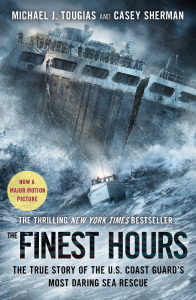 In 1952, there were many large oil tankers that had been produced during WWII still a float on the sea. Often, they were now de-commissioned from the armed services and being used by commercial groups. This was not unusual and the men on them served their companies well.

In the winter of 1952, mid-February, New England was slammed by a nor-easter. It was a terrific storm and wrecked havoc all up and down the sea coast. However, it was on the water where the worst was happening.

In the early hours, an oil tanker sent up a distress call. They were floundering and knew they were unlikely to survive the storm. Their hull was cracking, quite literally. Manufactured quickly during the war, the materials used were not quality and they were breaking apart. While the Coast Guard sent boats to their rescue, it was hard going. The Coast Guard typically used smaller vessels to head out to sea to help and these small vessels were having to battle waves that were 70 and 80 feet high, much taller than their small ships. However, they set out to help the oil tanker.

The Coast Guard, however, was in for a huge surprise. While looking for the oil tanker, a plane noticed an oil tanker broken in half. Yet, it didn’t appear to be the one he was looking for. Sure enough, a second oil tanker had broken in half during the storm before they were able to get a distress call off. By luck, they were found and additional rescue boats were sent their way.

The Finest Hours details the rescue of the men on the two oil tankers and the lives of the men who set out to rescue them, knowing they were likely to not return home. These were definitely “the finest hours” of the Coast Guard rescue teams.

Based on a true story, this one is worth reading. It is captivating and invigorating. It was one I could not put down and read into the night to find out what happened. As you might imagine with this type of storm and this many people involved, not everyone survived. Without the Coast Guard, though, it is likely none of the men would have survived. This is a story of possibility because of the men who went out in those small Coast Guard boats.