Venturing With God In Congo ~ a Crew review

Disclaimer: I received a FREE copy of this product through the HOMESCHOOL REVIEW CREW in exchange for my honest review. I was not required to write a positive review nor was I compensated in any other way. 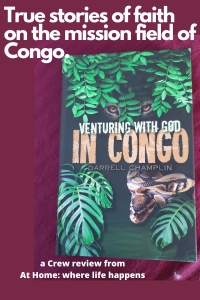 Missionary stories are fascinating to me and to my oldest daughter. The amazing difficulties that they persevere through in order to share the word of God, the Bible, and the message of salvation with others can be very inspiring. That was the appeal of this book by Darrell Champlin. Venturing with God in Congo is a hardback book of 290 pages that shares some of the stories of the author with his family and coworkers in Congo over the course of about 10 years, before having to be evacuated due to danger from the revolution. It is published by Conjurske Publications.

The book begins with the author talking about his childhood and adult life. Mr. Champlin discusses how he felt called to missionary work and how deeply that was taught for many of his generation. This section is followed by a similar discussion from his wife, Louise Champlin. Mrs. Champlin is the main editor of this book as it is compiled after the passing of her husband, though he wrote the stories themselves. And then, the stories begin.

While the stories are fairly chronological, they are independent of each other. There are stories of people, places, events, and animals. They are engaging stories that really bring alive the life of people from the inland, native villages of Congo. Through these stories, the reader learns of the beautiful, tough country, the lifestyle, the living quarters, and the difficulties the missionaries and the people they taught go through day by day.

Living in stick and mud huts for several years, the family learned to live on a diet of mostly cassava leaves and flour, supplemented by a bit of meat from hunts. This meat could be anything from snake to elephant, though it is devoid of the common types of meat in an American diet. They learned to cook over small fires and do laundry in the river, while watching for animals that could be dangerous. They learned to build using what was available in the jungle.

But, the focus here is on the people. The attempts these missionaries made to live with the people of Congo in order to reach them with the gospel. And there were many successes. The beliefs that had to be overcome in order to do this were significant, as is always true in a culture that doesn’t know the gospel of Jesus Christ. There were family issues that had to be understood and worked through. But, they were able to convert many to Christ and these converts stood strong, often in the face of opposition.

One of the strongest stories to me was of a young man who had converted and was studying at their school. He was always there. Always! When he stopped arriving, they were concerned but knowing the ways of the jungle, knew he could have just been delayed. When week after week went by, they grew worried. Finally, after weeks and weeks, he arrived back at the school ready to continue learning. What they found out about him was that his father had illegally killed an elephant and was to be punished for it. The young man knew his father would not survive the punishment as jail there tended to include daily beatings. So, the young man petitioned the judge to allow him to take the punishment of his father. It was allowed. So after the time for his father was served, this young man went back to school to learn to preach God’s word. Now, if that isn’t truly taking the gospel of Jesus to heart, I don’t know what is!

The heart of the book is what Mr. Champlin wrote above. Many stories in here serve to strengthen and encourage, but they also are just so we can know what others go through in order to serve God. It is intended to help the reader serve God more boldly. Not every one will be a missionary whose lives are in danger often but every one can be a missionary on the street where they live, with those they are in contact with. And that is why stories like this are so important.

I definitely recommend this book. I would love a better map as I like to follow the places the stories take place. I looked a couple maps up online but they don’t really use the same village names. Also, they are often post-revolution maps, so they don’t contain all the villages and places that were burnt and destroyed.

I do know that some of the stories are tough to read and might not be appropriate for a child who is sensitive to the suffering of others or who is frightened from reading stories of danger. Both of these are possibilities for the readers of these stories but that should not prevent us from reading them.

Please click on the banner below to visit the Homeschool Review Crew to read what other families thought about the stories from Venturing with God in Congo.

One thought on “Venturing With God In Congo ~ a Crew review”