Electrical Circuits – Blogging Through the Alphabet 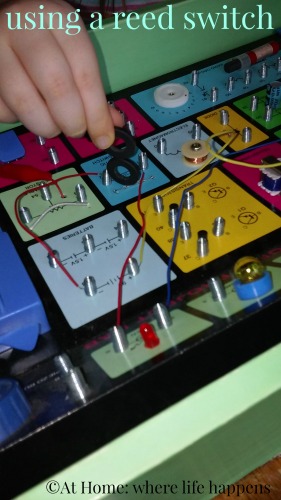 A while back, my dad pulled out a couple of electrical circuitry boards that he had used to teach my brothers some things about electricity when we were all younger. He gave them to us and I set them aside for another time. Well, that time came last week when we were all feeling a bit under the weather but we still wanted to accomplish something. You know that place, right?

Well, electrical circuits to the rescue. The day was saved. At least for Miss J. She was terribly excited to see these and to try them out, now that we had bought the right batteries to run them. We have to boards. Both of them are by Science Fair. One is 60 In One Electronic Project Kit. The other is 160 In One Electronic Project Kit. We started with the smaller one.

Turns out, these were WAYYYY easier to use than I had expected. The booklets that come with them explain how to hook them up, the order in which to hook the wires up, and what each setup is supposed to do. Then, it explains why it works (or it should – we did have a couple not work correctly).

We worked on a basic on/off switch. We tried out hand at traffic lights (something didn’t work there). We used a reed switch to turn on and off a light. We did two or three other small projects and then we put it away for the time being. It won’t be put away for long and it is much closer at hand now than it was before.

There is probably a good reason to work through the projects from the start of the book but we just picked a chose. It was an exploration project at the time. I imagine we will take this up a bit more regimented at some point in the not too distant future because Miss J was so interested in it. 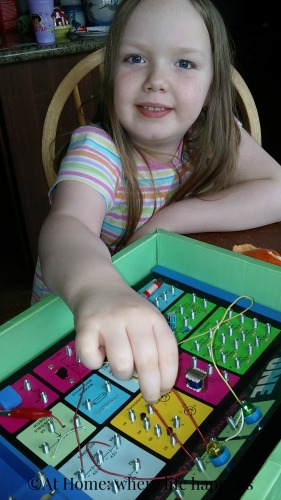 Join the ABC blogging group hosted by A Net In Time and Hopkins Homeschool and link up your ABC posts.

23 thoughts on “Electrical Circuits – Blogging Through the Alphabet”